Having sugar gliders as pets is a serious responsibility that should not be taken lightly. Because they are exotic animals, caring for them is not as easy as it would be to care for a dog or cat. They have some highly specialized needs that you will have to learn about so you can take proper care of them.

There are several things you should take into consideration before you decide to get a pet sugar glider. I cannot stress this enough, because there is a widespread misconception that sugar gliders are easy to care for, just like a guinea pig or hamster. This is absolutely not true. Sugar glider care is much more complicated because of their special needs.

Being a sugar glider owner will require a lot more from you than if you were to get a domestic animal such as a guinea pig or hamster. Don’t get me wrong, they do make great pets. They are wonderful animals that can form amazing bonds with their owners.

However, you must do plenty of research beforehand and make sure you are willing to do what it takes to be a responsible sugar glider owner. All too often people get them on impulse and then end up abandoning them when they decide it’s too much work to take care of them.

Here are 5 questions you should ask yourself before you decide to take on sugar gliders as pets. These are not the only things you should consider, but they will give you a good start.

1. Are you willing to feed your sugar glider a proper diet?

Diet is one of the most controversial topics when it comes to sugar glider care. There are some people out there who will try to convince you that sugar gliders only need a dry pellet diet and an occasional apple slice. The truth is that they will quickly become malnourished and can get a variety of health problems from a pellet diet, such as Hind Leg Paralysis.

A nutritionally balanced diet for gliders consists of 50% protein, 25% fresh or frozen fruits, and 25% fresh or frozen vegetables. Most of the food can be bought at a normal grocery store, so it isn’t very difficult to feed them a proper diet. It just isn’t as easy as opening up a bag of dry food and putting it in their dish.

There are a lot of other things relating to diet that you will need to learn about, and if that seems too overwhelming, then sugar gliders probably aren’t the right pet for you.

2. Are you prepared to have at least 2 sugar gliders?

Sugar gliders live in colonies in the wild and are highly social animals. They just aren’t wired to live alone and can develop health problems due to loneliness and depression when they don’t have at least one other glider companion. Although single gliders can survive, they will likely never thrive.

It is common for people to get one sugar glider and later realize it was a mistake when their glider develops issues. Lone gliders are at risk of becoming depressed due to stress and loneliness. It is very common for them to over groom and develop bald spots. They also get sick more easily because stress weakens their immune systems.

It is much better to keep gliders in pairs at a minimum. When they have at least one other companion of their own species, they will do a lot better. It will also be easier on you because you won’t be your gliders only companion. When you have a single glider, you have to spend a lot more time with it because it will get lonely.

3. Does your schedule allow you to have a nocturnal pet?

Sugar gliders are nocturnal, so they will sleep during the day and eat and play at night. For most people, this means you will be on a different sleeping schedule than your gliders. You can carry them on you in a pouch during the day, but be aware that they will be awake through the night and can be noisy.

Some gliders are noisier than others, so you won’t know for sure until you get them. They do bark and make noise climbing and jumping in their cages. If you keep them in a separate room then it shouldn’t be much of a problem.

If you go to bed very early, it probably won’t work very well to have sugar gliders because you should let them out of their cage for a couple hours every night to play and interact with you. You really need to spend time interacting with them to form a good bond.

4. Can you handle having a pet that can’t be potty trained?

Sugar gliders will go potty whenever and wherever they feel the urge. They really cannot be potty trained. If you let them roam free in a glider proofed room, you should expect to find accidents.

Their accidents are not big and are easy to clean, but because they are small, they aren’t always easy to find. If this bothers you, you should probably look for another pet. Unfortunately there really isn’t any way around it.

5. Can you make sure your home is safe for your gliders?

Sugar gliders are a lot like toddlers, and just like you need to toddler-proof a home, you will need to glider-proof any area of your home that your gliders have access to.

It is also a good idea to glider proof your entire home in case they were to get out of their cage. They are known to be skilled escape artists due to their handy opposable thumbs.

Another issue to be aware of is that gliders do not fare well around other household pets. They are prey animals, so cats and dogs will most likely be a danger to them. Some people claim that you can bond gliders to your other pets, but that isn’t true. There are always exceptions to that, but in the vast majority of cases, your average cat or dog is going to see a glider as prey.

Gliders can also be a danger to smaller pets. They are omnivores and do eat smaller animals such as birds and lizards, so you defnitely don’t want to keep them in the same cage as other smaller pets you might have.

If you have answered no to any of these questions, it is probably not a good idea to get sugar gliders as pets. These are by no means the only questions you should ask yourself before making a decision, but they will get you off to a good start. You should definitely take your time making this decision and do as much research as you can beforehand so there are no surprises down the road. 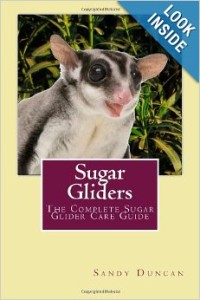